This post will contain minor spoilers, so if you do not wish to know anything about the book, please stop reading here. 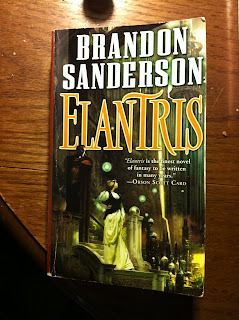 Having been a fan of Robert Jordan's Wheel of Time for quite some years now, and having been a fan of fantasy for as long as I can remember, I was not able to resist picking up a book by Brandon Sanderson when it became clear that he was to be the one to finish Jordan's epic fantasy series after Jordan's death in 2007. Luckily, I found one of Sanderson's free-standing fantasy novels in the sale when Borders closed down (yes, I remember where and when I bought every book in my bookshelf), the one called Elantris. As I had barely heard of Sanderson before his involvement with the Wheel of Time, apart from a note I made when still in high school that I should read his Mistborn series, I was quite curious to see how this author, who has done such a great job with the Wheel of Time, would hold up on his own. There was no doubt in my mind that he would be great as Jordan's wife and editor had personally picked Sanderson out to finish the book series which at the time had grown to 11 books, with more planned.

Before Christmas, I finally got around to reading Elantris and was surprised quite early in the book. There is one thing to fantasy books that is both frustrating but partly what makes it so compelling: it is built around medieval worlds. Medieval worlds in all their glory with shining armour, magic and the occasional dragons also bring with them a rigid set of gender roles. Women are women who dress in dresses, cook food and while there might be women who are awesome at points and defying the normative confines of gender through, say, slaying a nazgûl, they usually do it in the disguise of a man.

Robert Jordan is not exactly known for using fluid concepts of gender in his books, and while he arguably has strong female characters, there is a constant raging battle of the sexes taking place within Rand-land where women are poised against men and the dividing line of gender seems to be based on the notion of biology rather than cultures, so that women can co-operate over the boundaries of culture but will always, no exception, be confused by men's ways of thinking and vice versa. There are inherent qualities ascribed to the genders in the Wheel of Time that are not challenged. (More on gender in Wheel of Time from Swan Tower.)

So when I picked up Sanderson's Elantris, I was not only pleased to find that he did not use such a rigid concept as Jordan had in his Wheel of Time, but Sanderson actually experiments with gender roles in this book in a way that is seldom found in the fantasy genre. Two of the main protagonists, Sarene (a woman and Teod princess) and Raoden (a man and Arelish prince) seemed from the outset to have broken the norms of gender to such a degree that I could not help but suspect that this book was, among other things, very much an intended experiment in gender. Sarene, the princess, feels she has been denied love and being viewed as a woman all her life for being so opinionated, blunt and political, while her betrothed Raoden is a character who bases most his decisions on irrational trust, emotions and empathy. Both these people, however, operate within a world where women are oppressed and forced into passiveness while the men enjoy all the power and most of the freedom of being and movement which is what makes it so interesting. This is a world that is built much like other fantasy worlds, but one in which these particular characters challenge the norms.

I started off by loving these characters. There is nothing that peaks my interest as a clear break and challenge to our non-fantasy real world's norms, even if it is just fictional characters in a book. I loved it how Sarene would be forceful and scheming and how Raoden would use his inherent belief in the goodness of people, a totally irrational assumption, to argue for his political beliefs. I kept cheering these characters on - at least until it became dull. Sarene continued her scheming, manipulating and to completely discard any kind of human feelings, basing everything upon rationality. She was breaking her gender roles as a woman, but instead dressing in those of a man. Now, while this shows that assumptions of inherent qualities in women might very well be wrong, it is hardly a breaking of rigid gender roles. Instead of challenging women's gender roles, Sarene just assumed another pair of them, albeit the antonyms to her own. Same thing with Raoden. He seemed to rely on empathy and caring to the degree I started wondering if he was modelled upon the stereotypical view of mothers and motherhood. Instead of being the stern but loving father of his people, he started becoming the loving and nurturing mother of Elantris. There is nothing wrong with these qualities in people, but from a gender challenging perspective it is not so interesting. It is more about switching gender roles than actually challenging them.

Fortunately, as the book carried on, at least one of the characters started becoming human. Sarene, in all her cynicism, hardness and political scheming started thinking about how she yearned for the great love, that she was afraid that no one could love her for her ways because she was a woman with personality traits like those she had. There was a lot of thoughts on how she had tried to change, but would not become as silly as the ladies in the court in her home country and her adopted country. She was content with the person she was, that was clear, but she felt it unfair that she should have to sacrifice such things as love and a family because she was intelligent. These types of considerations are very important lest the character shall become a cliché; one of those women in fantasy who challenge the norm to the degree where they adopt the ways of the other gender and refuse all traditional gender traits. Once again, this is not challenging the gender normativity, it is just buying into another side of it, consequently reinforcing it. A woman who has to assume male gender roles to be taken seriously is not challenging the system, she is reinforcing it through proving and thinking that she has to adopt masculine roles to gain power and be taken seriously.

This, unfortunately, is where it started to go wrong. Instead of Raoden starting to question his irrational belief in empathy and emotions, he kept going in the same direction even though there were several opportunities for him to question his belief. In a way, this could be a sign of unwillingness to develop personally or, if he weren't so intelligent, be a indicator of naïvete. However, with him eventually becoming something akin to a demigod who would not only be the most powerful such, but also the most controlled and wise such, it hardly offered any opportunity to question his perceived superiority. His beloved princess would show human flaws and stay human, he himself would not, and become a powerful demigod of a king. Added to that, when Sarene strives from her expected gender roles she is severely disliked, almost shunned by men and women alike. Raoden, on the other hand, breaks gender roles and is described as "loved by all." The symbolism is quite striking.

Elantris actually had several other themes that were interesting from a political and/or sociological standpoint. There was this constant view of 'otherness' displayed by Elantris, and especially after the transformation when its inhabitants were shunned and feared. The moral story and implications of this was interesting and important as well.

The politics in the book was also interesting; a guide to how to not build a nation. It can definitely be read as a criticism against capitalism with the portrayal of Arelon's nobility being silly despot merchants and the social status in the country being dependent on one's private property holdings. The religious differences and the portrayal of how it affected societies in their various different ways, as well as the inability to coexist side by side was really interesting if one considers our own human history. It is enough with one religion wanting to eradicate the others for oppression and civil wars to come about.

All in all, it was a really interesting book. A great approach to a social experiment that points out a lot of social ills and challenges quite a few social norms; it is a book that is riddled with implications of the choices people make socially, economically, religiously and politically. It was a novel that I found really interesting in the way that it was as much a good story as a well-thought through social experiment. It is clear that Sanderson has given this world quite a lot of thought.

Although I found the depiction of gender somewhat lacking, I really enjoyed the attempt to walk away from narrow gender confines that are so often found and reproduced in the fantasy genre. I would most certainly recommend people to read it, and I will read more of Sanderson in the future. It gives me hope to think that there can be such a thing as feminist fantasy.

People who find a reason to read my rants